A group of bounty hunters has been assembled on Geonosis (those bounty hunters are you guys and me, that play this RPG) by the sinister Count Dooku. Their quest is to find a Jedi who is on Geonosis and is supposedly trying to find out the separatist's plans and where they will strike next. Tryearus is going to lead this operation.

Things that you should know:

The times that I will probably be on CodeBearers:

Week days, not weekends or past 4 PM.

1# No controlling other people's characters.

3# No killing other people's characters.

4# No being all powerful.

5# You must post once a week at least, (please post lots) if you do not post for more then a week you will be given a warning after I have give you a few warnings if you still do not post I will probably kill your character.

Ideas for your characters:

5# A Trandoshan (Bossk's kind of alien)

And you can be any other alien from star wars that is humanoid.

Aliens you can not be:

How to make a characters:

Name: (You can have a last name if you want)

Species: (Look in the ideas for your characters to get ideas if you want)

Description: (Pleas use a pic if you cannot find one I may be able to help)

Weapons: (pic if you want, or just describe it. and no Lightsabers)

Bio/Personalty: (Do not write everything about your character so that there is room for improvement) (he would look like the closest one but his skin color would be turquoise, and his hat would be black, and his left eye would be robotic kind of like this. Weapons: blaster pistol (silver pistol with a small scope) and a sawed off shotgun (short silver gun with a square barrel)and a sniper rifle (silver rifle with scope that can be taken apart)

Bio/Personalty: He is very smart, and good with just about any weapon, (but with bounty hunter clothes)

Bio/Personalty: Does not talk much, and is very smart. Bio/Personalty: A former Jedi Knight who left the Order when he became disillusioned with the corruption in the Republic, Dooku is the public face of the Separatist Alliance leadership. Many see him as a charismatic politician, but he has in truth been corrupted to the dark side by Darth Sidious.

(I will pobably put your characters up on here after I approve of it.Oh, and for now you can only have one character) 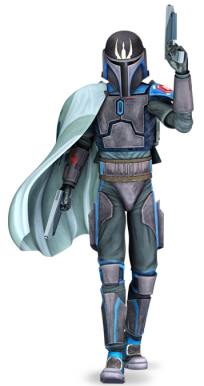 There is no Dark Saber 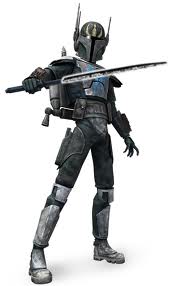 Weapons/Armor/Equipment: Although he is skilled with all weapons, he uses two Mandolorian blaster pistols. He wears the traditional Mandolorian armor that has a jet pack with a missile mounted on it, just in case he needs some extra fire power. He also had guntlets on his arms that are equpped with a flame thrower and wrist rockets. Besides the armor he took from a Mandolorian he killed, he made another suit of armor for himself that is equiped with a comlink on his helmet.

Bio/Personality: He is a strong and tough person that is always ready for a fight. He never tolerates failure and he always gets his man whether they are dead or alive. 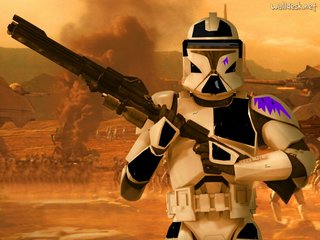 Bio:personality: Learns easily and knows how to get the job done. He enjoys being a bounty hunter and wishes for nothing else. Hes smart,cunning and very trickly when he battles. 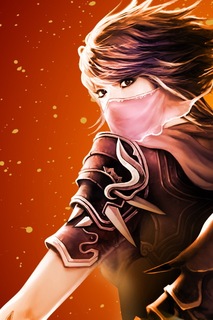 Description: Chocolate brown hair with wide gold lines in it. She ususally dyes them a slightly lighter brown like dark chocolate with streaks of milk chocolate. Gold eyes with narrow pupils like a cat's. Slightly pointed ears with sensitive hearing.

Weapons: Two hand blasters, a knife, a couple grenades, and she is slightly Force-sensitive. Not enough to be a Jedi, but enough so that she can sense where people are.

Bio/Personalty: She is basicly like a pinapple. Tough and prickly on the outside, (though blessed with potentially deadly beauty) and soft on the inside if anyone can get past her shell. Weapons: A clone commander pistol with a flame thrower on it and rocket launcher and a scope.

Bio/Personalty: Never vary happy and keeps to himself. Weapons: a long shot rifle and a pistol

Description: Has a decidedly sassy, "stand off, don't touch me" air. Has a secret crush on a jedi master who's name is unknown to her.  She is shocked when she is made an incredibely good offer by a distant relative of greedo to track him down and take his life, and nearly looses her own life in an attempt to decline it. Because of that reason, she's always on the run, but can occasionally stay more that a week or so with a group of bounty hunters in more descreet locations. She has many hidden weapons and pouches on her person, and you never when she'l pull out a blaster, death stick, or some other greatly feared device. Grew up on several planets, and spent two years as a slave. (She is a twi' lek after all.) Has many scars, bruises and traces from personal skirmishes. Loves to storm swin in her spare time.

I want to join. I like this show. Can I be a Mandalorian?

Gotcha. Working on the pic now...

Oh, and if any one needs a pic you can go on to this link http://www.starwars.com/explore/encyclopedia/characters/

I think I found one! How's this: 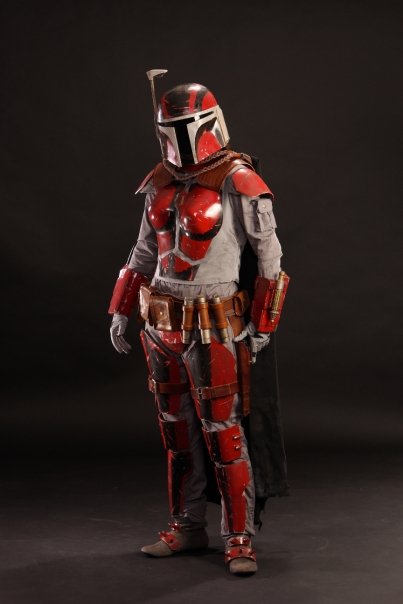 But he has more battle scars and armor and weapons.

Looks awesome! Now you just got to make a profile. :D

I REALLY WANT TO JOIN, but i have never seen the show! :(

Hey, Ezra :G have you seen the star wars movie? And if you want to see the Clone wars TV show just go on YouTube and search Star wars the clone wars season 1 episode 1. Or you could order the clone wars from a Library.

1: I have only seen VERY little of Episode I, probably only like 40 minutes!

2: I can't rent the Star Wars cause my mom hates them!

3: I barely have internet, so i use my time on the internet very wisely! :(