3, a number that is used far more often than you might care to know. For instance, is it a coincidence that Jesus Christ died when he was 33 and rose from the dead 3 days later? That he is part of the trinity? What about the primary colors? They come in three as well.  I have been greatly fascinated by the number for some undistinguishable reason, and I tend to notice it fairly often. I'm sure if anyone pays a certain amount of attention to something, they begin to notice patterns. Most everything random, when paid attention to long enough is realized to be perfectly routine.
Well, regarding this number, I was reflecting on sins. Namely the spiritual warfare behind sins such as core strongholds etc. As well as the many sins that are in the world today, drunkeness, foolishness of the tongue, etc. And I noticed a trend, when traced entirely back to their orgins, all of these things appeared to root from 3 specific, and large, sins. They are: 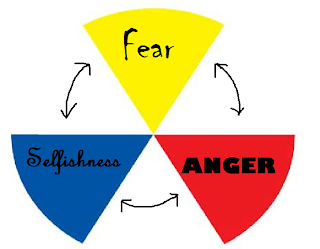 Now all of these things as well can cause each other. Anger and fear can be caused by selfishness, fear and selfishness by anger etc.
Think about it, Getting drunk? If you are not being mindful of how it will affect those around you you are being selfish, if you are being mindful but do it any way...you're in a lot of ttrouble and you're still being selfish. Coveting is selfish. Not moving forward in your walk with Christ it is a result of fear or anger.
I can't help but think of 1 Cor 13:13, where it tells us of 3 spiritual benefactors: "faith, hope and love," but goes on to explian that "the greatest of these is love."
If anyone has seen the powerpuff girls, you might think of these counterparts:

I love the powerpuff girls, and again, they come in 3;) The ones, on the left, the Rowdeyruff boys were in some of my favorite episodes.
In return, it might could be said, "There are three main strongholds that are anger, fear, and selfishness, but the greatest of these is selfishness."
In giving freely, and not questioning things in the perspective of, "will this hinder my life?" You can follow Jesus's command to love your neighbor almost fully. I think, what to get out of this is, that when you are praying during the day, when praying against strongholds etc, you could pray against these three, and replace them, or ask in turn for faith, hope, and love.

This is not law, it was just one of the many things I was curious about and was reflecting on. If you notice anything flawed with this, or have something you might like to add, please write them in the comment box, I would love to hear what you have to say on this, and/or edit this (for lack of a better word) "philosophy."

Thanks Blade:) It was fun to write:) I've contemplated this often, so finally decided to put it down

WOAH! A fellow 3someer;) I actually meant to put in the part about rising on the third day, i just wrote this really fast and forgot;)

Also,on the third day Jesus rose and there were three crosses on mt.calvary and there are three parts to an apple the skin the meat and the core.